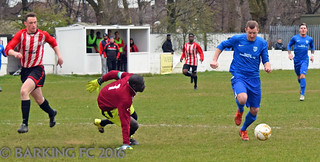 Barking joint-boss Glen Golby believes his team demonstrated their full strength in a 3-1 defeat of Clapton in the Essex Senior League.

The Blues had been hit by a spate of injuries in recent weeks, but Joe Staunton and Billy Rix were the only first-team regulars to miss out as Tons made the trip to Mayesbrook Park.

Barking took an early lead in the sixth minute as James Peagram struck for the fifth game in a row and was joined on the scoresheet by team mate John Bricknell seven minutes later.

Peagram all but ensured the points in the 27th minute as the Blues raced in to a 3-0 lead, before Tony Cookey pulled one back for the visitors from the spot.

The hosts held on, though, for a first victory in three games, and while Golby was pleased to return to winning ways, he knows he should have had more to celebrate.

“It was a decent result for us, and while I would have liked a clean sheet, I thought we performed well,” said Golby.

“It was nice to have almost a full squad available bar Joe and Billy and we were able to show how good a team we are when not hit by injuries.”

While the Blues were impressive in victory, they were no doubt helped by Tons having one eye on the final of the Gordon Brasted Memorial Trophy final less than 48 hours later before Storm Katie intervened.

The visitors rested a number of players and Barking took full advantage to take their early lead, but Golby was pleased a contentious penalty decision did not allow Clapton back into the game late on.

“We were playing well early on, but I think we were helped by Clapton planning for their final and resting a few players.” added Golby.

“When they got their penalty, it meant we couldn’t pull players off early as we’d seen the week before what can happen with momentum against Greenhouse Sports (Barking lost after leading 2-0).

“We felt that we should have had a free kick before the penalty was given and that our player won the ball in the penalty incident. It put them back in the game, whereas if we were 3-0 up at half time, it would have been over.”