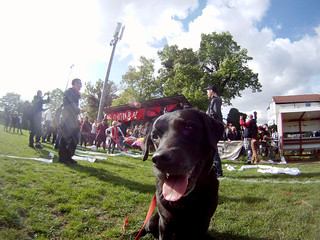 Clapton’s penultimate Essex Senior League match of the season was watched by 246 people at the Old Spotted Dog on Saturday and the staggering attendance delighted manager Chris Wood.

Although the Tons lost 3-1 to FC Romania the incredible crowd, which astonishingly bettered every match in Ryman One North bar one fixture, delighted Wood and he praised the ‘Ultras’ for their support this season.

Wood said: “It was a great crowd and they gave Romania a great welcome because the supporters always give everyone a good welcome.

“The crowd was fantastic and it has just got better all season. They’ve been amazing and it isn’t just local fans either.

“We are getting everyone, supporters from Football League clubs are coming along and saying it is a better atmosphere than at league games. People from Kent and all over are coming.“

The Clapton fans might not have been treated to a victory but the hosts were able to find the net in their league loss.

Sergiu Pitaru made it 3-0 before Luke Kanjor pulled one back to allow the home fans one final goal celebration at the Old Spotted Dog on a Saturday this season.

Wood felt his side matched Romania for long periods of the game and has challenged his players to end the season successfully against Eton Manor tomorrow night.

Although technically an ‘away’ fixture, the Tons’ final league match of the season will be played at the Old Spotted Dog.

Wood added: “I said to them on Saturday, we were as good as Romania, but for a few parts of the match.